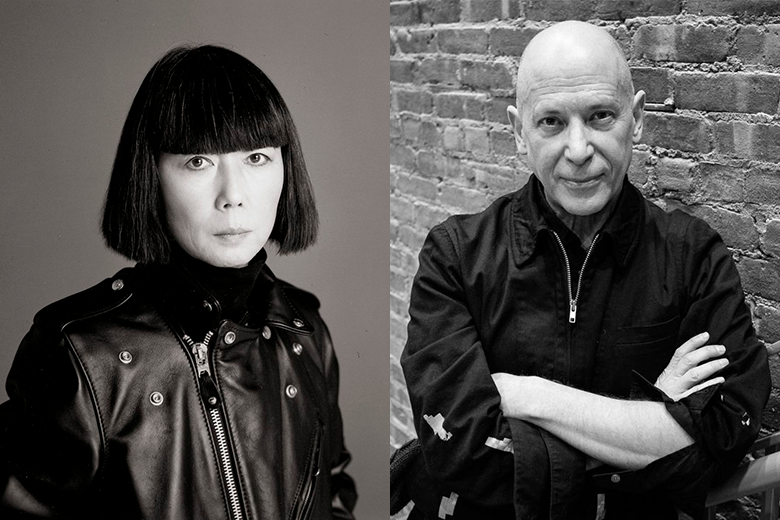 Rei Kawakubo‘s husband and president of cult fashion brand Comme des Garçons, Adrian Joffe has recently been under netizen’s fire over debate of lack of models’ diversity on their fashion shows.
Trouble started on Tumblr when user amen69fashion wrote a post complaining about Comme lack of racial diversity in their show, bringing up the fact that the brand didn’t cast a single model of color since 1994.

The user encouraged everyone to get to Adrian Joffe’s Instagram and address him about this issue: 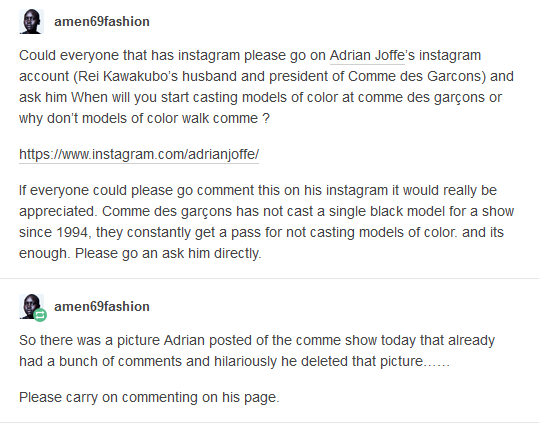 This call out post ensued people to rush to Joffe’s Instagram that got spammed by hundreds of comments repeatedly asking “Why don’t you cast models of colors??“. Joffe urgently addressed this ‘call out OP’ by ignoring the accusations, deleting every spammed posts – the movement mushroomed so much he basically had to delete all of his entries -, and blocked every commenting users. He eventually resorted turning off the commenting option to get some respite. 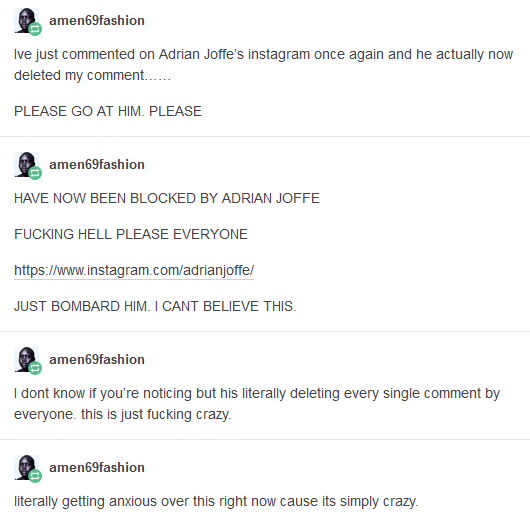 There is unfortunately no remain of people’s outrage on Joffe’s now cleaned up Insta page (which I suspect is now heavily moderated/monitored), but Tumblr users who participated to the call out OP shared their opinions on their platform :

“And yet he has pictures of Ancient Egyptian stuff on his page….”

“lol he’s been turning his comments off. coward.”

“He’s a white South African so I wouldn’t bank on any change?”

“We need to stop trying to blindly believe CdG is not doing this on purpose and has no malicious intent. Rei Kawakubo and Adrian Joffe are purposefully ignoring and silencing any kind of criticism against the lack of diversity in their casting. They ARE being racist and they ARE being anti-black. It’s hard to accept especially because a lot of people feel like CdG has shown that fashion can be about something else than beauty and can be an act of kindness towards yourself but it’s obvious that they have no intention to go against the racism and anti-blackness of the fashion system at large and are intentionally participating in it. How can you call your brand “a gift to oneself” and then act like that? This is getting exhausting. Their attitude towards any kind of criticism is disgusting.”

I’ll second the comment above last sentence saying that more than anything, this is Joffe’s petty reaction which actually worsened the whole situation.
As someone being hailed as the “last real punk of fashion industry“, refusing to face and answer the accusations and concerns of people, willingly ignoring and silencing them, reveal to some degree an obvious disdain for the ‘lesser ones’. Being an alleged “libertarian” didn’t stop him to endorse a very conservative disregard towards opinions of people he didn’t deem worthy of his attention.

The courtyard of CDG and Trading Museum for the launch of @luncheonmagazine photo and wonderfulness @francesvonhofmannsthal with @suzymenkesvogue @roversi @stephenjonesmillinery. #bestwhiskey

Comme des Garçons is unanimously praised for its avant-garde & unapologetic vision of fashion along with its innovative and prosperous business model, but considering Joffe’s deafening silence about one of fashion industry’s most addressed problem, it’s like their actual last limit was casting non-White models – which is pretty ironic, if not utterly disconcerting.
But at Comme‘s discharge, a fair share of other Japanese fashion brands seem to endorse – more or less explicitly – a ‘White models only’ casting policy.

Jun Takahashi’s UNDERCOVER is the most obvious. I have an insider’s anecdote relating that when one Asian model (who was the insider’s friend) attended their casting, some assistant came to her, shrugged her hand a bit embarrassed and said “sorry, we cast White models only“. 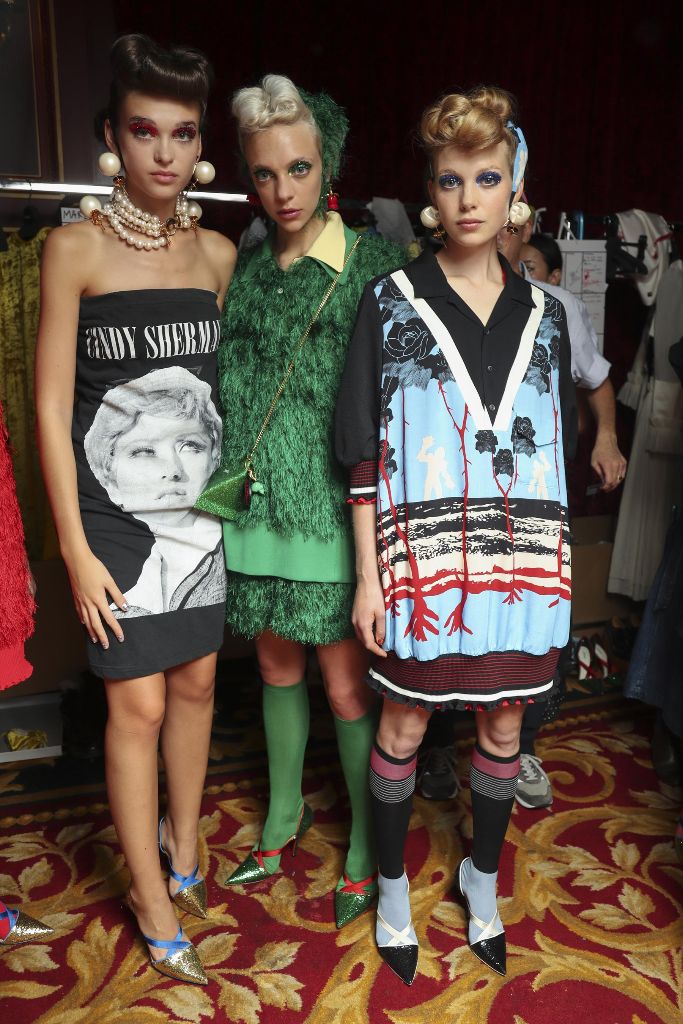 The lack of models diversity is a well-known problem that has been addressed many times, even from many industry insider. But this issue becomes more tricky when non-White designers seem to endorse this ideology. Pandering to a Western audience is not necessarily an excuse since some international Japanese designers promote “Japonism” through their designs and ‘Asian only’ casting direction as a way to differentiate themselves from a Western dominated fashion market.

Whoever ever read a Japanese high fashion magazine may have been quite surprised by the amount of foreign models. Their prominence could be explained by the high-profile (reverse) ‘exoticness’ they assert, but this reality only adds to the statement admitting the dominance of White models regardless of magazines’ countries of publication is a global concern.

As a Fashion Designer myself, my stance on the whole Joffe drama is mostly amused, but also a bit conflicted.

While I think there is pertinence to call out designers when they apply blatant discriminatory casting rules, one may wonder if trying to dictate who designers should cast or not is not actually crossing the line.
I would never deny the blatant lack of models diversity, but I think it’s bit pointless to harass designers over casting choice. Endlessly begging and expecting change from well established designers/fashion houses with a steady “”creative universe”” won’t bring magically change – and the most aggressive call out OP are definitively not going to help with it. Bad publicity is actually something that can bring some relevance to waning houses in a desperate attempt be back in the public eye. Whoever didn’t work within this industry would be surprised by its disconcerting tolerance to controversy and fascination to political incorrectness.

It’s about time people realize that the only way to turn tables and bring change in the fashion industry is through rise of young blood : new designers, new casting directors, new creative directors, etc. Instead of looking for validation from others, we should look back to ourselves and see our potential to change an industry that has been ruled by the same old washed out big-heads way too long.

Expecting things to be to be handed down to us through silly spam campaign may be entertaining, but I’m a bit sceptical about their actual relevance on the long run. We shouldn’t underestimate our potential to bring a real game changing experience and provide a more balanced and effective response than contestation only.
Let’s not waste our potential losing our time bothering people who clearly don’t care about us or our concerns – and never will. The ball is in our camp.