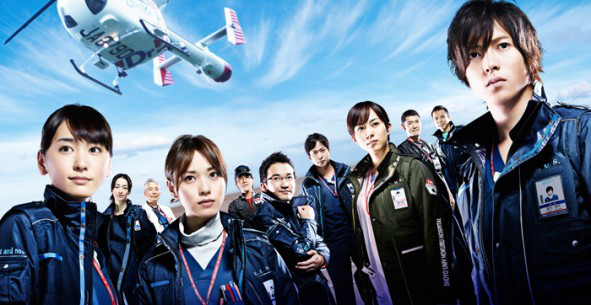 On March 10, it has been announced that the 3rd season of “Code Blue” featuring Tomohisa Yamashita, Yui Aragaki, and Erika Toda will air during the Getsu 9 slot starting this July.  Yosuke Asari and Manami Higa have also been announced to reunite.

The series began in July 2008 depicting young men and women aiming to become doctors part of the “Doctor Helicopter” system.  After a 1-episode special, the 2nd season aired from January 2010, making this new season a 7-year reunion.

The 5 main cast members were up-and-coming when the series began, but they have grown to become leading-class actors.  Yamashita commented, “I’m very happy to be able to get together as 5 again, and to be able to play Aizawa’s role once more.  I hope to be able to show my growth to everyone.  The ‘Doctor Helicopter’ system first deployed 14 aircrafts but that number will go up to 50 next month, and I’m honestly very happy and proud to have been able to spread awareness of these doctors through this drama.  I hope to be able to contribute more through this new season.  I will put in everything I have.”

Additional cast members including roles of new juniors will be announced at a later time.