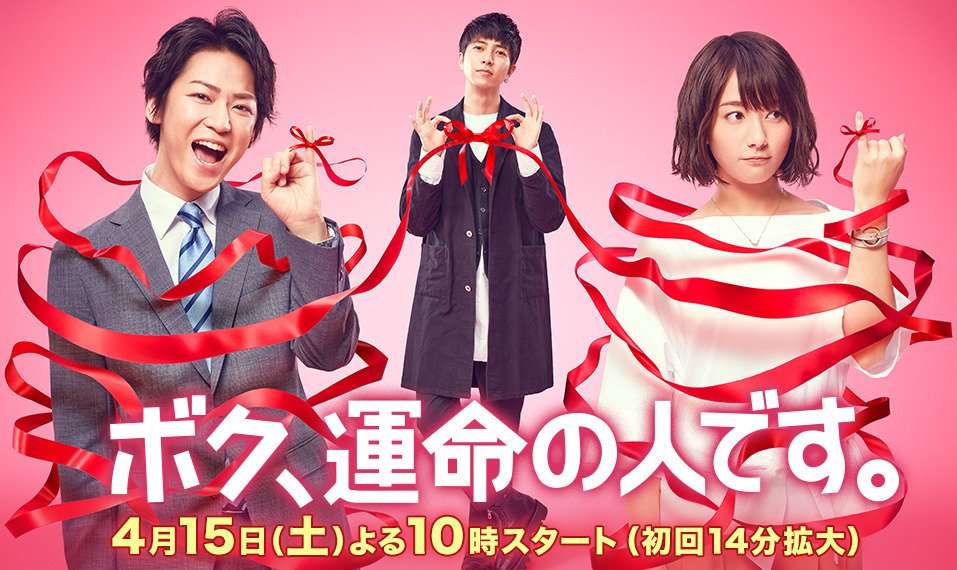 Several weeks ago, the reunion of Kamenashi Kazuya and Yamashita Tomohisa 12 years after the popular series “Nobuta Wo Produce” hits news and got fans excited. Less than a month before the new drama series “Boku, Unmei no Hito Desu” (I’m Your Destiny) airs, the first visuals and teasers are out! Kimura Fumino plays the heroine in this romantic comedy drama that gets relentlessly chased by Makoto (Kamenashi) after much prompt from a mysterious guy who claims to be “god” (Yamashita).

Check out the main cast in their new characters and new hair in the latest previews! Yamapi hasn’t appeared yet on promo VTRs with Kamenashi and Kimura, but as the airing date nears, you can expect more promotional appearances from the cast. On April 15, prior to the drama broadcast, Arashi ni Shiyagare will air a 3 hour SP. Matsumoto Jun’s “THIS IS MJ” corner will feature an MJ vs Yamashita and Kamenashi segment.

Stay tuned as well for the drama theme song to be sung by “Kame to Yamapi”. “Boku, Unmei no Hito Desu” will start airing April 15 (Saturday, 10pm) at NTV with a 14 min extended broadcast.

A strange man who claims to be “god” suddenly reveals himself to 29-year-old lead character Masaki Makoto and declares, “You haven’t realized it yet, but only a wall separates you from the one you must fall in love with, no matter what. The woman you’re destined to be with works in the office next door.”
“Sounds like something out of a creepy dream. But..,” wonders Makoto. Skeptical at first, he eventually decides to believe the prediction and just go for it.
“Please don’t be shocked. I’m your destiny,” he tells fellow 29-year-old Kogetsu Haruko.
“What?” she replies, before flat-out rejecting him. And that’s where their love story begins.

Whether it’s the beach they went to as children, their college entrance exam building, or the shrine where they offered prayers last New Year’s, it’s a miracle how the two have actually crossed paths countless times since they were little. Yet they don’t know each other’s name nor recognize each other’s face. The greatest “destiny” story kicks off on the worst possible note.