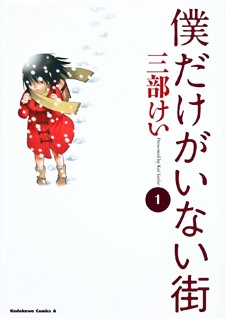 An official website for the anime was launched today and it is scheduled for winter 2016 meaning that it will air in around 7 months.

Boku dake ga Inai Machi(The Town Where Only I Am Missing) is written and illustrated by Kei Sanbe. It is serialized in June 2012 in seinen magazine Young Ace.

The manga was a finalist in the Manga Taisho Award for 2015, earning fourth place, and in 2014, the manga was the runner-up. The manga also ranked 9th place in the Kono Manga Ga Sugoi 2015 male readers top 20 category.

Synopsis
Struggling manga author Satoru Fujinuma is beset by his fear to express himself. However, he has a supernatural ability of being forced to prevent deaths and catastrophes by being sent back in time before the incident occurred, repeating time until the accident is prevented. One day, he gets involved in an accident that has him framed as a murderer. Desperate to save the victim, he sends himself back in time only to find himself as a grade-schooler one month before fellow classmate Kayo Hinadzuki went missing. Satoru now embarks on a new quest: to save Kayo and solve the mystery behind her disappearance.

Some context: Noitamina has this reputation of picking anime that would appeal to a more general and normal population.  Although they have deviated from it time to time, it looks like they’re back to picking series with a lot of potential.  A1 pictures is generally a strong studio with good funding because they are owned by aniplex, the distributor and backer of most animated projects in japan.