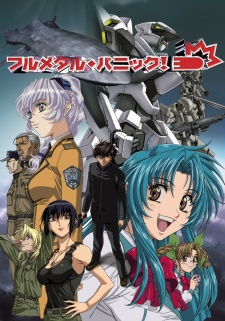 It was announced via Niconico at the Fantasia Bunko Big Thanksgiving 2015 event that Full Metal Panic! will be receiving a new anime adaptation. The announcement was made by the creator of the series.

It is currently unknown if the series will be a continuation or which studio will be animating the project but it is hinted that it will be a direct sequel to the 2nd season of the show, Full Metal Panic: The Second Raid.  The studio is not confirmed but it is known that a studio in Tokyo will produce the show so Kyoto Animation will not be returning to make this new season.
Full Metal Panic! is a light novel series written by Shoji Gatoh and illustrated by Douji Shiki. It has 12 volumes published by Fujimi Shobo .  The series was previously adapted into two TV series, a side story, and two special episodes.

Synopsis:
Jindai High School was a relatively safe place, right up until Sousuke Sagaka transferred there. A total nut, he wreaks havoc on the school’s student body and gets into a world of trouble with the teachers! But there’s more to Sousuke than meets the eye—not just a hell-raising student, he’s actually a member of an elite military unit, on an undercover mission to protect the beautiful schoolgirl Kaname Chidori from the KGB.