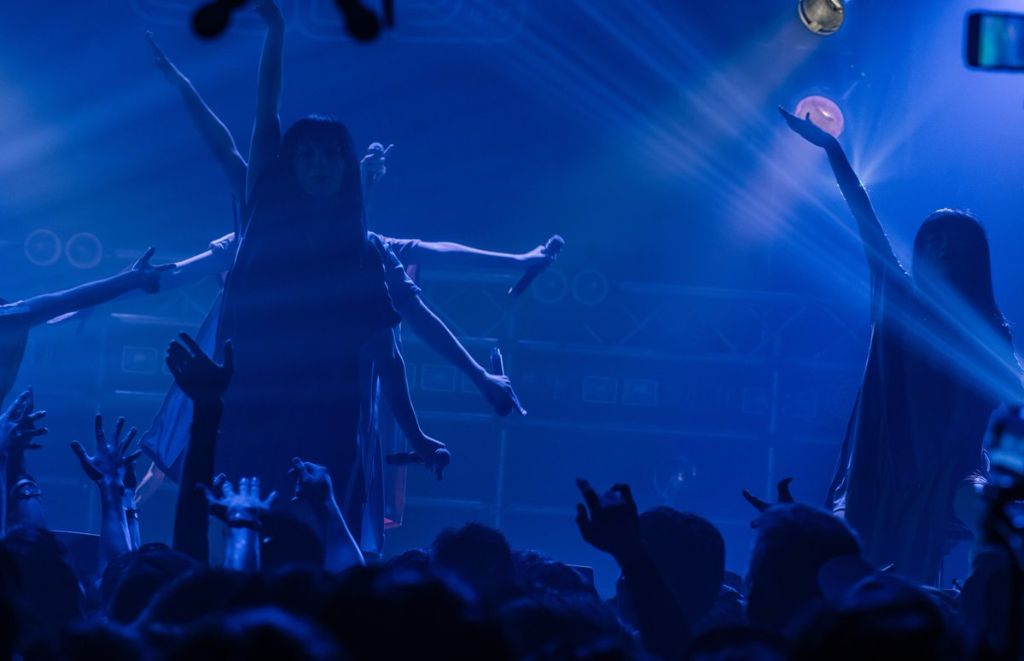 MIGMA SHELTER is certainly one of the most interesting acts in the Alt Idol  niche this year; part of the AqbiRec family (There There Theres, CLOCK&BOTAN), the six girls are the first unit in the scene to adopt Trance music as core of their sound, whereas other projects only briefly flirted with it to refine particular passages in certain tracks. While the peculiar sound proposed by MIGMA SHELTER surely played a major role in the positive reception the girls have been getting so far, solid songwriting is the winning element of their formula, welcoming occasional Rock influences – borrowed from producer Tanaka’s other projects of the same family – while maintaining Trance’s mesmerizing synths and beats as predominant elements.

If MIGMA SHELTER‘s first single “Svaha Eraser” was generally acclaimed as a solid debut in the Idol circles, “Amazing Glow” carries the same formula on while finding the time and space to improve certain aspects of the unit’s sound, making it slightly less redundant and more focused on several driving elements, vocal melodies and hooks in primis. Throughout its three tracks, the single indeed flows steadily and engages the listener in a much more consistent way than before, with hard-hitting rhythmic sections floating around catchy choruses and contagious vocal lines, occasionally mixed with Rock elements that blend in seamlessly and enrich the overall sound, making the whole experience various and more captivating. The title track makes the balance between instrumental sections and verses its highlight, constantly emphasizing the sinister, almost alienating atmosphere with progressive vocal lines and occasional layers of insidious synths typical of the genre; the songwriting constantly shows a great flow control between crescendos and refrains, wrapping everything up with an heartfelt chorus that engages the listener right away, making “Amazing Glow” one of MIGMA SHELTER’s most convincing compositions to date. “Mo’Strain” mostly takes notes from the unit’s previous release, alternating redundant vocal sections with electric guitar riffs, progressing at a slow pace and culminating in a final chorus featuring overlapping layers of vocals, showcasing the ability of the unit in turning Trance’s typical repetitive sections into catchy mantra-like passages. Based on a much more unpredictable structure, “GIPS” revolves around a contagious hook that gets twisted and manipulated throughout the whole track, hiding a bizarre (but somehow fitting) Reggae-like break in the middle, to then resume with an instrumental break leading to an extended final verse, a risky experimentation that cleverly keeps sight of the unit’s sound and pays off unexpectedly well.

Each of these tracks features a very distinct personality, and despite being a single release, “Amazing Glow” brings variety and showcases courage by experimenting and playing with different patterns, while still delivering a consistent result thanks to solid songwriting. If “Svaha Eraser” felt like a work in progress of MIGMA SHELTER‘s sound, “Amazing Glow” is the solid foundation of a formula that’s genuinely entertaining and charming, creating nothing but positive expectations for future releases.

MIGMA SHELTER’s second single “Amazing Glow” is available for purchase on OTOTOY. Be sure to check out a preview of the single down here.