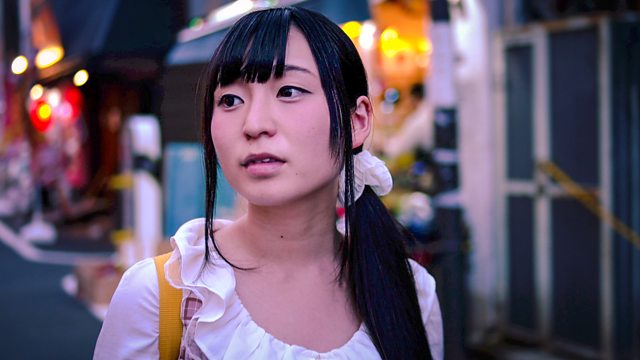 Stabbings, stalkings, semen handshakes! Idol fans are the scum of the earth! The idol industry just encourages this mess! How many times have we’ve heard this before? Countless at this point (and yes, I admit that I have added fuel to this fire). Yes, the idol industry is problematic, but doesn’t it feel like this has all been said before? Well apparently not. The BBC recently aired Kyoko Miyake’s documentary “Tokyo Girls”, an expose on the idol industry and its fans.

“Tokyo Girls” mainly follows the story of a 19 year old idol named Rio Hiiragi and her fans, most of whom are socially awkward middle-aged men that have little to no prospects in life, professionally or romantically. Several of the male fans in “Tokyo Girls” admit to being awkward socially. Rio even performs a song called “Akiba Romance” (translated as “Akihabara, Mecca of Otaku”), in which she describes her fans as “commusho”, meaning that they have “communication disabilities.” There are also segments featuring idol groups P.IDL, Harajuku Monogatari, and Amore Carina and the same can be said for their fans as well.

Watching the girls, they are trying to live their dreams of becoming a star, and also using idoldom as a way of boosting their self-esteem. Their self-motivation in getting a career going for themselves is admirable.

But the men… Ohh, the men… Watching these men, I can’t help but think that they really must have mental disorders. They really think that these girls are into them on some level, these girls that are often young enough to be their daughters. But why are these men even going after girls this young? Because they can’t cut it with a woman closer to their own age. And that’s just sad. What’s even sadder is that one of these men, P.IDL fan Mitacchi, has essentially abandoned his elderly parents because he’d rather feed his idol addiction.

One of my favorite people in the documentary, because I agreed with her so much, was journalist Minori Kitahara. She’s an idol industry outsider and has faced aggresive backlash due to her criticism of the industry. During a segment featuring AKB48’s election, she says that society feed girls the idea that “making the most of your feminine assets and winning male admiration brings you ultimate happiness.” During the handshake portion of the Harajuku Monogatari segment, she states, “These men never try to hold hands with regular women. They think they should be loved and accepted without making any effort.” This idea is basically confirmed when Harajuku Monogatari fan Naoyamumu is asked why he doesn’t just find a girlfriend closer to his own age at his university. He replies that it’s too much work and he’d rather not be tied down. Kitahara later says, “Instead of connecting with women around them, these men choose girls they can dominate, girls who are guaranteed not to challenge or hurt them. This society will stop at nothing to protect male fantasies and provide comfort for men.”

In the documentary, Hyadain talked about how male idol fans often feel powerless in real life, but at an idol concert, they feel as if they are fighting alongside the girls against The Establishment.

It’s often asked where are the parents of underage idols. The mother of Harajuku Monogatari’s 14 year old Amu says that at first the idea of older men being fans of her daughter scared her, but after getting to know them, she realized that they are nice, and views them as father figures. The mother of 10 year old Yuzu of Amore Carina said that she was suprised at first when she heard the deep voices of old men screaming in support of her daughter. She didn’t think think men of that age would be interested in girls so young.

Continuing with the underage theme, there was a bit of what I feel was editing dishonesty in the Amore Carina segment. Shin, a fan who looks to be mid 20s at most, said “Their selling point is that they’re not fully developed. If they were older, they wouldn’t interest me.” Everyone who follows Japanese music knows that fans like idols in part because they like seeing their talent mature over time. There was an odd sexual slant presented here that I don’t think Shin was going for.

The most interesting thing in this documentary was cultural commentator Akio Nakamori saying that today’s Tokyo is like London in the 70s, in that the economy has stagnated and that the cultural scene is dead. People were looking for something new. London got the Sex Pistols, while Tokyo got idol culture.

I also found the comments of Itaru Tsurami, Tokyo Girls Update’s Chief Idol Officer, to be interesting. He said that that the line between the mainstream and otaku culture is blurring. Part of this is due to the rise in sales of idol groups over the past few years due to gimmicks like handshake tickets, which is something he touched on when he mentioned that idol fans often buy too many CDs, unlike normal people. Another interesting comment of his was “The fans want to feel like they’re the same age as the girls. The more childish the conversation, the better. They feel safe and can let their guard down. They can feel pure and free again. Idols have that healing effect.”

The idol industry doesn’t seem to be all benefitial to the idols or the fans though. Rio is asked if she wants a boyfriend. She answers, “I don’t go to events where I can meet guys. When my friends tell me what they’re up to, I realize they’re turning into adults. For me, everything’s about work now. I’m not sure if that’s good or bad.” Her biggest fan, Koji, is asked if he’s looking for a wife, and he says that he’s having too much fun as an otaku, pointing out that there is a live show daily. He added, “Who’d fall for an otaku who just quit his salaryman job?” He continued, “Anyway, I’m 43. In 10 years I’ll probably get various diseases. If I don’t have fun now, I never will.”

Koji gets even more depressing at Rio’s 21st birthday concert. “I was in the middle of the front row. I looked behind me and saw all these faces. They looked happy and desperate at the same time. It was so moving. You don’t often see such joy and release. With these guys, I don’t have to worry about social rank and obligations. If it wasn’t for this, I’d be alone forever. Unmarried and alone in the truest sense.”

I find the idea of this documentary presenting AKB48’s members as stars to be odd. Anyone that follows Japanese music knows that the AKB48 brand name is bigger than that of any of its members, most of whom aren’t really easily named by the public (even fans have admitted that they don’t know all the girls’ names). To further show how strong the AKB48 brand name is over the name of the actual girls, look at how many of them have flopped after leaving the group. And look at the value of the names of individual AKB48 members against the names of actual stars like Utada Hikaru, Namie Amuro, and Nishino Kana. It’s also funny how all these women who are actual stars in their own right rather than being attached to a brand name are not under the male gaze, but instead rely largely on female support. How many real female stars in Japanese music are as high as they are because of the male gaze?

One really weird thing is that Koji, upon announcing that Rio had signed a major label record deal, also announced that she was no longer an idol, but now an artist. Umm, how does that work?

But the bigger question I have is why is there this smear campaign by the media worldwide against Japanese pop culture? This narrative has been going on for years at this point, this narrative that Japan is a mixture of the cute and the crazy. Anyone who watches a show like the one I just posted earlier tonight, TV Tokyo Music Festival 2017, can see how ordinary Japanese pop culture really is. There’s this focusing on a particular niche by the media, the otaku one, rather than a representation of what is really happening. Media is all about clicks and views these days, so this Kawaii / Weird Japan meme works for the media. But aren’t people tired of this by now?

At the same time, I can’t help but look at South Korea and think about how appealing their media coverage is for the past few years. But then again, South Korea left no real impression on people pre-Hallyu and was often confused with North Korea. South Korea was basically a blank slate. And I also can’t help but think that a lot of the media coverage in the West of KPop specifically is very self-congratulatory in a way, as in Look at what we, the West, are doing, and look at how these Asians are copying it, meaning that we, the West, must be amazing. It leads me to think that if South Korea was more unique in terms of pop culture, it wouldn’t be as covered by Western media, or even favored by Western fans as much for that matter.

So I get it, Japan gets the coverage it does because it doesn’t subscribe to Western hegemony in terms of pop culture. But why not focus on something else, besides this meme? Because it takes work, and the media is largely lazy at this point.

I’m reminded now of all those reports about how Japanese people aren’t having sex, leading to population decline. Instead of investigating why, the media often just chalks it up to Japan being weird, when it’s quite easy to see that it’s a mix of economics, social anxiety on the part of men, and the lack of equality for women.

In the notes on the documentary, Miyake says that she did this documentary because she felt that the idol phenomeon “had something to do with what made me uncomfortable about being a woman in Japan and I wanted to explore it.” I don’t want to tell her how to do her job, but watching “Tokyo Girls”, I felt as if no new ground was really broken. She would’ve broken new ground if for once Japanese women were portrayed in international media as strong figures, as opposed to these cute, submissive beings. Why not do a documentary on strong, relevant female figures in Japanese pop culture today, instead of just filming irrelevants because it garners views?

Watch “Tokyo Girls” before its inevitable taken off of YouTube for copyright infringement!