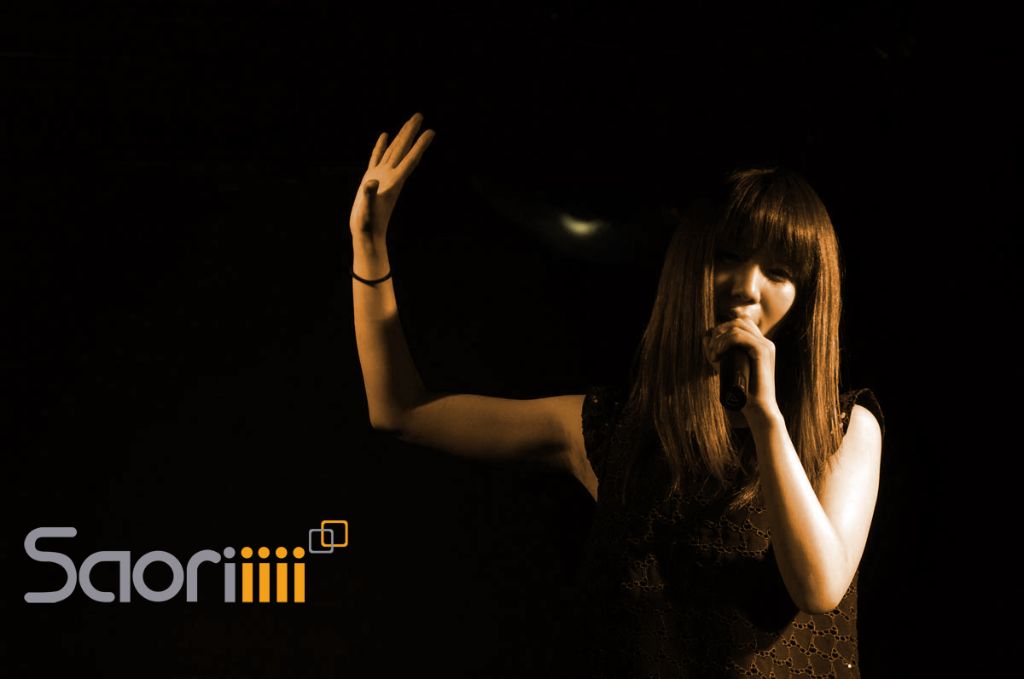 Hi Arama. Today I’m presenting Saoriiiii (that’s five “I”s), a freshly redebuted artist who some of you may remember by the stage name of [email protected]

Saoriiiii is the artist formerly known as [email protected] With her real name and age unknown, she started out in the entertainment industry by auditioning to become a first generation member of the massive idol group AKB48. After losing the audition, Saori took up “performing” street lives in Akihabara or, rather, lip-syncing to artists’ songs as she danced. She then took her passion for performing to Kyoto, where she auditioned in 2007 for a then-burgeoning artist management company known as D-topia Entertainment. Saori passed and became one of few artists under them (one of her contemporaries was electro-pop artist Aira Mitsuki). She released her debut single “My Boy” in December 2007, and later her major debut single “Sakura” (a cover of the Kyogo Kawaguchi song) and first album JAPANESE CHAOS in 2008.

Life as an artist was not easy for Saori. Her career as [email protected] managed to last five years, and within that time she gained a small cult following in Japan and a similarly enthusiastic overseas fanbase. Unfortunately, these weren’t enough to sustain her, and as D-topia was slowly falling apart, Saori bowed out of the industry and held her final live on April 1st, 2012.

The last thing fans expected was her return to the industry. In the summer of 2014, it was announced that Saori would come back to doing music, now under the stage name “Saoriiiii”. Her explanation for the stage name was that “[her] destiny turned out to be a lot of love” (the five “I”s are homophonic with the Japanese word “ai”, which means love). Though she is no longer under D-topia and now has no major label backing her career, Saori is holding live performances again and her comeback has been warmly received by fans both Japanese and foreign who eagerly hoped she would return.

So what’s the big deal?

Saori is one of the standout artists within the niche Japanese electronic dance genre. Though she isn’t a technically skilled singer, her voice possesses a characteristically melancholic sound that brings out the most from her often depressing lyrical content, all amid strong backing beats and/or chaotic melodies which define her music and set it apart from other artists in the genre. For someone who started out wanting to be an idol singer and has described herself as being unfamiliar with electronic music, Saori has transcended all expectations and contributed an iconic personage to the often overlooked world of Japanese electro.

As [email protected], her music was usually created by the elusive producer Oonishi Terukado (who also often worked under aliases, making it trickier to pinpoint which songs are definitively his doing). She was not exclusively produced by one individual, which allowed her music to continue being fresh and innovative.

As Saoriiiii, she seems to be following a similar route, having already worked with the electronic unit CANDLES (headed by its producer tess), Yamamoto Shinpei from electro unit islandhouse, and Sasaki Kissa from recoride. Since there are so many different musicians whom she collaborates with, fans’ focus tends to end up on Saori’s lyrics and artistic vision.

Her work as [email protected]

During her initial career, Saori released two original albums (JAPANESE CHAOS and WORLD WILD 2010), a collaboration album with aforementioned fellow artist Aira Mitsuki (×~PARK OF THE SAFARI) in 2011, and two mini-albums (WOW WAR TECHNO and Domestic domain) in 2009 and 2011 respectively. Unfortunately, due to the budget limitations of a small-scale company like D-topia and the intention of promoting her as an “underground” artist (as opposed to Aira, who was meant to be a “mainstream” artist), Saori never received the level of exposure or proper music videos that her work deserved. In fact, this is her only PV, for the song “WOW WAR TECHNO”:

Still with me? Great!

Despite everything that worked against her, Saori’s music brought in a passionate fanbase and she was able to hold energetic live shows on small club stages. Her shows were marked by the presence of synth players who would often improvise and add flourishes to her material, helping foster a great live environment. Two picks:

Since Saori came back very recently, there isn’t much in the way of newly released material yet. She was a guest vocalist on a song from CANDLES’ recent EP, and a track called “runaway?” is being distributed at her live shows with a remix by CANDLES on one CD and a remix by islandhouse on the other.

She does, however, have a track called “3cm Distance” available now in international iTunes stores, Amazon MP3, and streaming via Spotify as well as distribution to Recochoku, Labelgate, OTOTOY, and KKBOX.

So where can I find Saoriiiii?

Additionally, WORLD WILD 2010, Domestic domain, and ×~PARK OF THE SAFARI are available on iTunes. Her complete discography can be bought physically off CDJapan. The YouTube account HikariSyndrome, which is run by a fan, has tons of old live footage of Saori and other D-topia artists from back in the day.

Thank you for reading