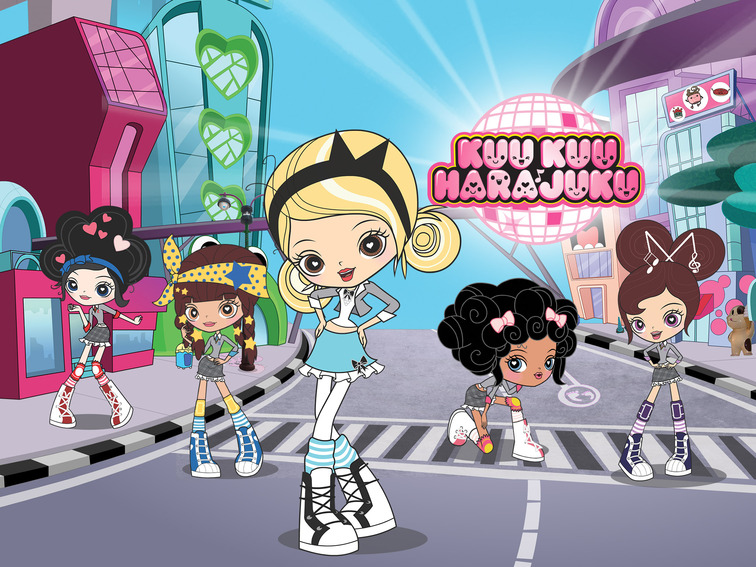 It has been 12 years since Queen of Cultural Appropriation Gwen Stefani first enlisted her posse of silent Japanese girls (collectively known as the Harajuku girls), and it seems like she still doesn’t see what’s wrong with it.

In the United States, her brand new animated series Kuu Kuu Harajuku will air on Nickelodeon on October 3, 2016.

Kuu Kuu Harajuku is a production by Gwen Stefani and inspired by her Harajuku Lovers brand. It features G (Stefani) and the Harajuku Girls (Love, Angel, Music and Baby) and follows their adventures in Harajuku World. Together, the girls form the band HJ5.

With a name that references Harajuku, a geographic area in Tokyo known internationally as a center of Japanese youth culture and fashion, looking at the image above you might be wondering where the Japanese girls are. From her days with the Harajuku Girls, you can see that the school uniforms are there and one girl has hair sticks, but these “Harajuku” Girls look more like Bratz dolls than anything related to Harajuku culture.

In November of last year, in an interview to promote Kuu Kuu Harajuku with Australia’s Sunshine Coast Daily, Stefani said: “The Harajuku Girls can do anything, they can wear anything, and they can be anything.”

If that’s the case, then why is she still using the Harajuku name as part of her brand in 2016 if there is no relation, even after she has been called out for it many times?

In an interview with Time back in 2014, the singer called her Harajuku phase a “compliment” and simple appreciation of Japanese culture. Stefani said, “For me, everything that I did with the Harajuku Girls was just a pure compliment and being a fan. You can’t be a fan of somebody else? Or another culture? Of course, you can. Of course, you can celebrate other cultures. That’s what Japanese culture and American culture have done.”

Pop stars love to dismiss cultural appropriation arguments as simply appreciation, as if their only options as “fans” are to include foolish depictions of said culture. It’s like Japan was an uncharted territory until world explorer Gwen Stefani discovered it prior to the release of her her first solo album in 2004. That release was Love. Angel. Music. Baby — an album with an unusual marketing stunt: a group of four women given dehumanizing pet names acted as her personal props, following her around and dancing on command.

Everyday racism is often invisible. Maybe to you, the idea behind her Harajuku Girls is innocent (it’s not, by the way). Racism is not only pointing at a minority and calling them a bad name, and can be seen when you use cultural norms and ideas that oppress racialized persons in a systemic fashion. Like a wealthy white pop singer presenting Japanese women as passive and subservient by literally silencing them and using them her playthings.

To put it simply: anything informed solely by Western stereotypes of other cultures rather than the cultures themselves, making members of another culture your props and superficial use of another culture’s potent or sacred signifiers is not cool. The Harajuku Girls never existed to inform or educate the American public about Japanese culture, but to help a rich white person to make more money. It has undoubtedly become an integral part of her brand. Back in 2011, Stefani launched her kids’ clothing line at Target, Harajuku Mini, which literally has nothing to do with Harajuku fashion. What she did instead was misrepresent a highly stylized element of Japanese culture, take it away from its context and call it her own.

Cultural appropriation in itself is a real issue because it demonstrates the imbalance of power that still remains between cultures. When a culture has few resources to represent itself, those with the power to appropriate marginalized cultures also have the power to frame how the general public sees those cultures. It’s unlikely most Americans would have heard of Harajuku street style without Gwen Stefani, especially considering how few Japanese artists (or even Asian artists for that matter) are popular outside Asia. They don’t have the platform.

Many remember it as problematic, but for the most part, Stefani got away with it at the time. And she continues to get away with it to this day. And profit from it.

No one can doubt that Stefani appreciates Japan, or at least a very niche aspect of its popular culture, but it’s embarrassing that Stefani hasn’t used the past decade to educate herself on cultural appropriation. If Stefani really wants to take something meaningful from the culture she claims to admire, she needs to get it together and actually use her celebrity to respectfully represent them.