For the 2016 Skate Canada International competition, I had the opportunity to see the Men’s Free Skate and Ice Dance. Amazing performances were given; although some a little disappointing. The competition saw the comebacks from Canadian skaters: Kevin Reynolds, Tessa Virtue and Scott Moir. I was particularly excited to see well-known Japanese skater, Yuzuru Hanyu. I even managed to get a glimpse of the winning ladies before the men’s practice began.

During the six minute practice, Yuzuru wore a dark jacket, covering his competition costume. My mouth dropped when he took off his jacket, revealing a gorgeous sea green and dark blue costume. It was somewhat similar to his Etude in D Sharp Minor costume. And of course, as expected, I saw Yuzuru with his famous Winnie-the-Pooh tissue box.

In the free skate, Yuzuru failed his first jump attempt. He made a nice recovery and gave an overall beautiful performance. Despite Yuzuru’s mishaps, he was definitely the crowd favourite. I’m continually amazed at how many fans he has. There were many people shouting his name and holding up posters. Yuzuru received the most gifts by far, out of all the men skaters. Toy plushies of Winnie-the-Pooh were abundantly thrown onto the rink. It took a while to clean the rink up after Yuzuru’s performance.

To be completely frank, I’m not that well versed with the figure skating world. Even so, there were a couple of performances that really captivated me: Misha Ge who completed a flawless program and Kevin Reynolds who made a magnificent comeback. Both received standing ovations. Patrick Chan deservingly took first place with his free skate performance, which included quads! The crowd went wild for him. One audience member proclaimed his love, yelling “You’re the man, Patrick Chan!”. A harmonious laugh ensued from the crowd and even managed a smile from the man himself.

There were no Japanese skaters competing in the Ice Dance though. I was very surprised at the high-level performances from returnees Tessa Virtue and Scott Moir. The crowd wasn’t feeling the song choice of “Under Pressure” from Madison Chock and Evan Bates. However, their technical were very strong, winning them a well earned second place. Anna Cappellini and Luca Lanotte won the crowd over with a stunning performance but it wasn’t enough to make it to the top three. Canadian favourites, Piper Gilles and Paul Poirier gave the performance of their lives, nailing their rendition of “Con Buena Onda”.

It was a winning night for Canadians as two gold spots were captured by Patrick Chan for Mens and Tessa Virtue and Scott Moir for Ice Dance. Yuzuru was graceful as always when presented his silver medal. The audience got a few chuckles as Yuzuru comedically made jabs at first place winner, Patrick Chan. Yuzuru jokingly distancing himself from the fellow Canadian winners during the photoshoot. It was nice to see him as his usual cheery, humourous self. Yuzuru was also the last one to leave the rink. He made a couple rounds around the rink, thanking fans and bowing deeply before finally exiting the stage.
Outside, a crowd formed to catch a glimpse of Yuzuru Hanyu as he sat in the coach bus. I was surprised to see many Japanese fans, who travelled all the way from Japan. Who know skating tours were a thing? Yuzuru won’t be participating until the NHK Trophy, the last event before the Grand Prix Finals. But surely the overwhelming support will continue for Japanese skaters in the upcoming Rostelecom Cup in Moscow, Russia. 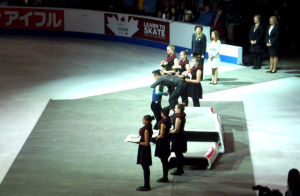 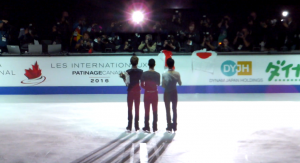 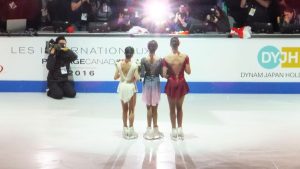