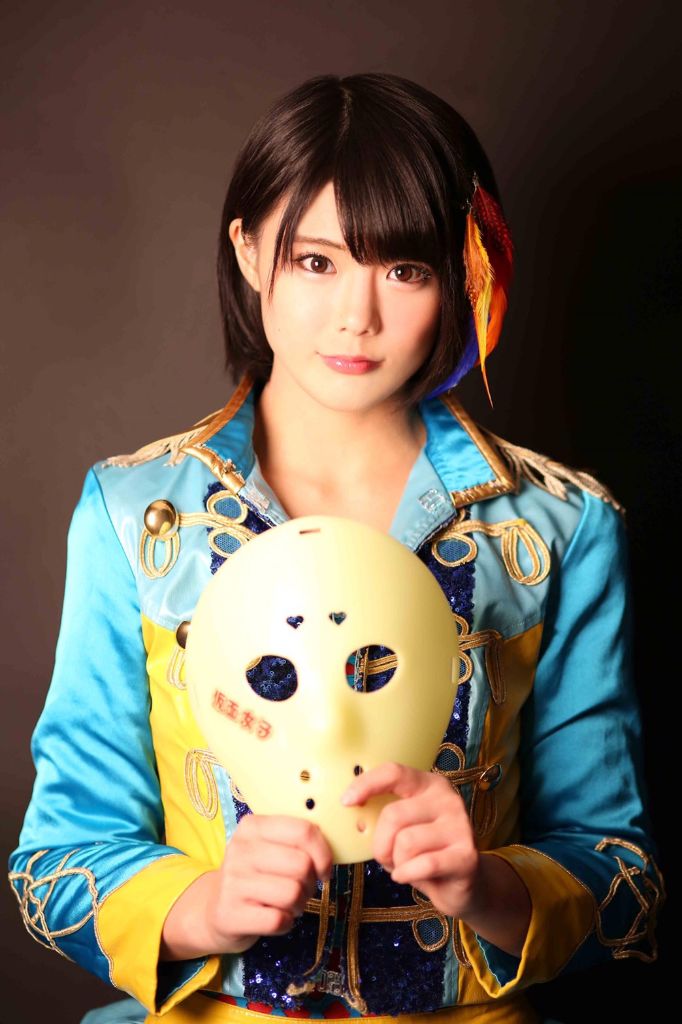 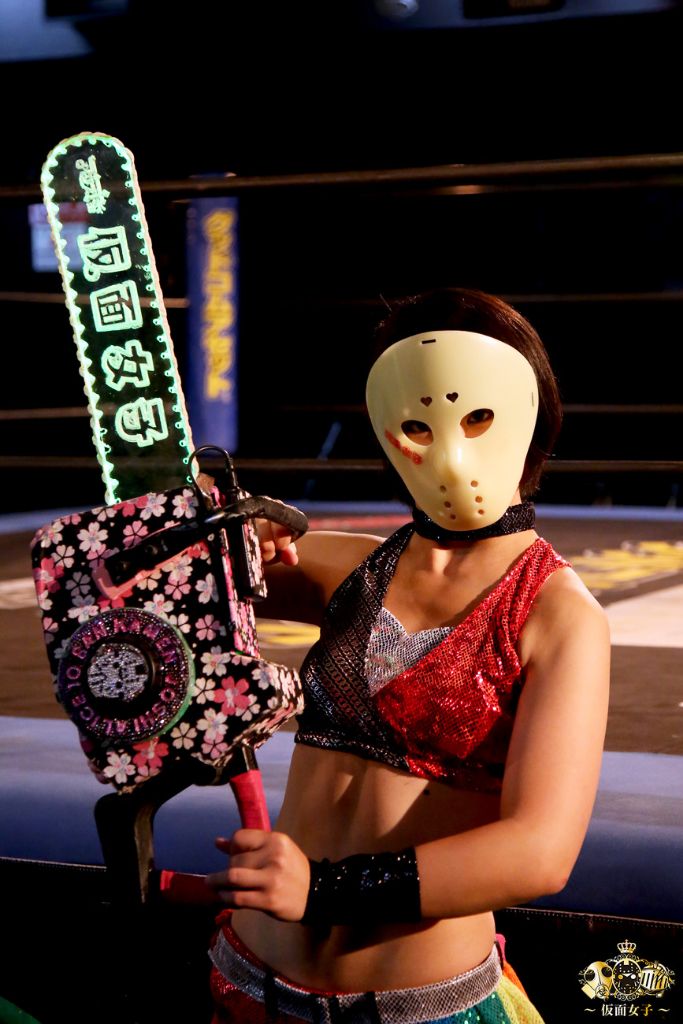 Please introduce yourself to the ARAMA! JAPAN readers!:
Nanaka Kawamura: Hi, I’m Nanaka Kawamura, and I’m a member of the metal idol unit Alice Juban, the main unit of Kamen Joshi. I started my MMA training last year, and I won at my debut fight at the Deep Jewels event on December 3rd, 2017. On YouTube, I started my own channel “CHOCO MESHI”, where I team up with (Kamen Joshi member) Hitomi Momose and we play pranks on each other.

For those unfamiliar, explain the concept of Kamen Joshi:
Nanaka Kawamura: Kamen Joshi is the strongest underground idol group formed by 4 units: Alice Juban, Steam Girls, Armor Girls and Easter Girls. We all wear hockey masks like Jason from the “Friday the 13th” movies.

What is your favorite thing about being a member of Kamen Joshi?:
Nanaka Kawamura: The best moments are when we’re performing at our own Kamen Joshi theater in Akihabara, interacting with the fans. Those are the moments when we all become one, and it’s something we can’t experience without the energy of our fans.

Also, I like to be unique. I do a lot of rap during the songs, and I’m happy to bring that unique element to Kamen Joshi. I’d always rather be cool than kawaii!

What inspired you to become a performer? What artists did you look up to while growing up?:
Nanaka Kawamura: When I was a middle school student, there were many kinds of idol groups releasing a lot of songs. The most popular idol group was, of course, AKB48. I admired them and watched their music videos on YouTube over and over dreaming about becoming the 49th member. Then, when I became a high school student, I found Kamen Joshi.

I saw their amazing live performance, doing head banging, wearing the crazy masks, and even stage-diving into the audience. I always wanted to be unique, and a voice inside me told me that this was exactly what I had been looking for. So I auditioned when I was 15 years old, and they accepted me! I was so happy. I only told my parents about my dream and everything after I got accepted, so I guess I really shocked them. But, actually, I shocked them again last year by suddenly saying I wanted to become a MMA fighter!

Kamen Joshi’s performances are always full of energy with intense choreography. What special training or practice do you do to maintain your stamina?:
Nanaka Kawamura: Since I was little, I loved exercising and all kind of sports. I used to belong to an athletic club in kindergarten, and I played volleyball from elementary school to 15 years old, then was a member of my high school’s dance team. I had to quit the team after I got accepted to Kamen Joshi, I still love dancing, and I’ve always found it easy to memorize choreography. But sometimes I’m a little spaced out when I get to the theater for rehearsal after my MMA training, but I roar “Kiai!” to myself and get focused right away. 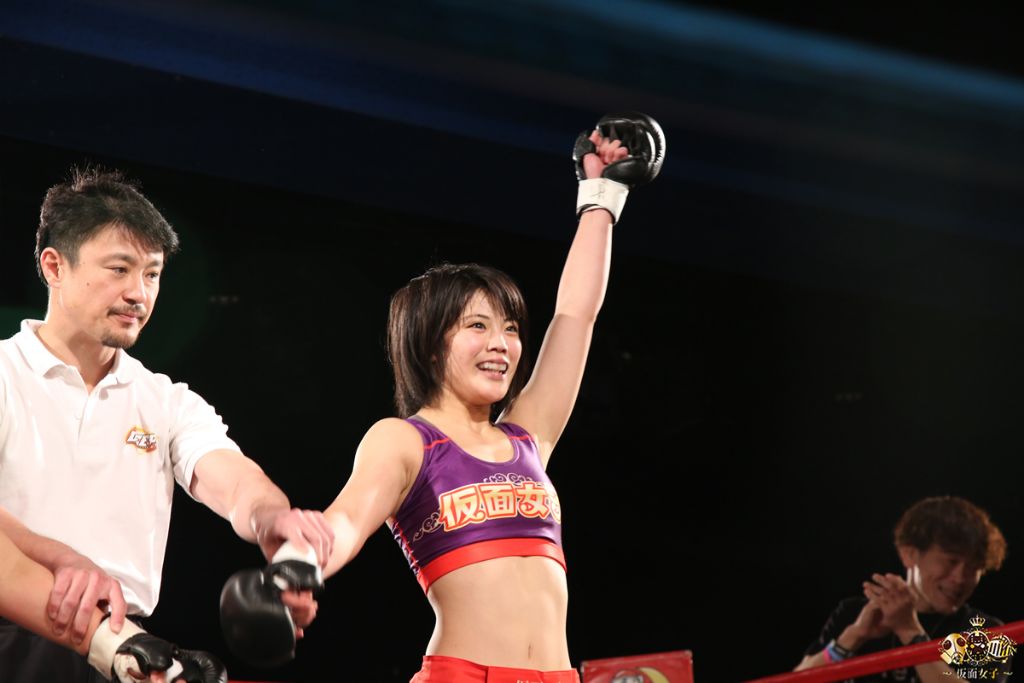 Why did you decide to enter the world of MMA/Wrestling?:
Nanaka Kawamura: When I first saw the female fighters in the ring at Deep Jewels, they were powerful just like men and awe-inspiring. I said to myself, “Is there anyone who competes in the ring while still performing as a real idol?” If I really want to give someone a dream and inspire someone like AKB48 inspired me, I have to stand out from the thousands and thousands of idols that exist in Japan and become the unique kind of idol I’ve always planned to be.

I shocked my talent agency when I first talked to them about becoming an MMA fighter while still performing as a member of Kamen Joshi. It scared them, because it was clear that I was serious about becoming a real fighter, just like I was so serious about becoming an idol, so there wouldn’t be any cheating or “idol-level” kind of match. I would be fighting for real as a professional. And they supported me one hundred percent, so I was able to be successful in my first match last year, and I have my next professional MMA fight this month.

What was the biggest challenge for you while training for your fight in December? (2017):
Nanaka Kawamura: I hate to run! Really, really hate it. But every morning I go to my gym and do my morning training with a professional MMA fighter and it starts with four sets of 200m runs, then I run up a slope for 100m, carry a 60kg guy on my back and run up again, then go back to the flat area and run zig zag.

This is part of the everyday training menu and I do this running training 4 times a week! And I tell my trainer, I tell everybody, I hate running! But it’s never, ever going to stop. Doing this routine and keeping myself positive is my challenge.

What was your favorite Kamen Joshi song to record?:
Nanaka Kawamura: I love “GENKIDANE☆” — it’s our single that scored number 1 on the Oricon chart. It’s a song about growing a little seed into a big flower that blooms beautifully. I use it as my official song when I enter the ring, too. I do the rap part in this song, so I really want you to listen to it!

What was your favorite Kamen Joshi music video experience?:
Nanaka Kawamura: “PERSONIA!” Definitely! “PERSONIA” is a metaphor for our journey together as Kamen Joshi. It took a long time to shoot and we spent many days together. Mostly we were singing and dancing in front of a green screen and had no idea how each scene would look, but when I saw the full version I was so impressed and surprised at what it became!

Please give a message for readers at ARAMA! JAPAN.:
Nanaka Kawamura: Hi ARAMA JAPAN! What do you think of Kamen Joshi? Our visual style might be scary at first, but if you come to our theater we guarantee you’ll have such a great time! Our fans are very warm and fun, so please come see us when you visit Japan. You might can find a new friend there! Who knows? I hope I can come and see you guys soon! 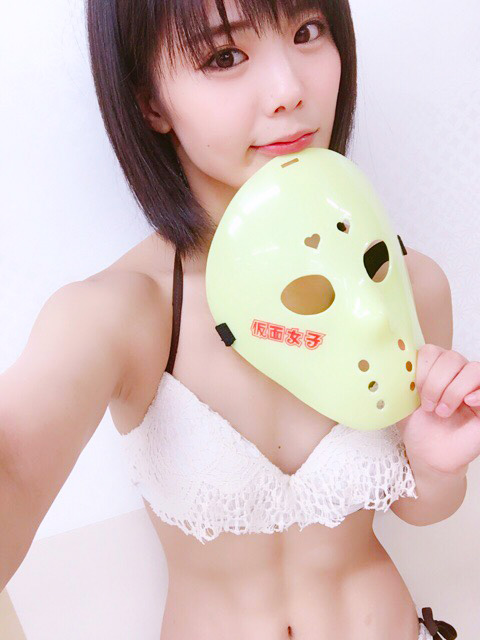