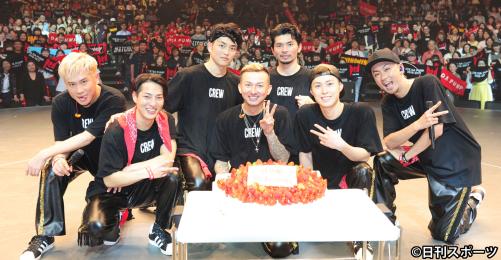 Today, seven-member dance and vocal group DA PUMP celebrated their 20th anniversary at the Maihama Amphitheater located within the Tokyo Disney Resort in Chiba Prefecture. On this day 20 years ago, DA PUMP debuted as a four-member group in 1997 with the song “Feelin Good – It’s Paradise.”

ISSA, 38, who has acted as the leader of the group since their formation, declared his lifelong dedication to DA PUMP, “This event isn’t anything serious, only a fun memorial of what we have accomplished together. We have worked hard and will continue to work hard in the future, going as far as we can.“

Today’s live is a sort-of “coming-of-age” ceremony, as is customary in Japan upon turning 20. DA PUMP performed 26 songs over the span of 3 hours to around 2,000 fans, including former member SHINOBU, 37, and actor Airi Taira.

Former member YUKINARAI, 38, gave his blessing to the media. “I’m cheering on DA PUMP as a former member. As a member at debut, we did our best and I’m proud of what we achieved as 4 members. Although I cannot attend the live, I’m praying for future success all the way from Okinawa. I support you guys!“

DA PUMP have released 28 singles and sold 5 million copies throughout their career. As one of the few male groups not associated with Johnny’s Entertainment, they were the first to gain major popularity reaching their peak in 2001 with the release of “Da Best of Da Pump.” Their achievements include participating at the NHK Kohaku Uta Gassen for five consecutive years from 1998 to 2002.