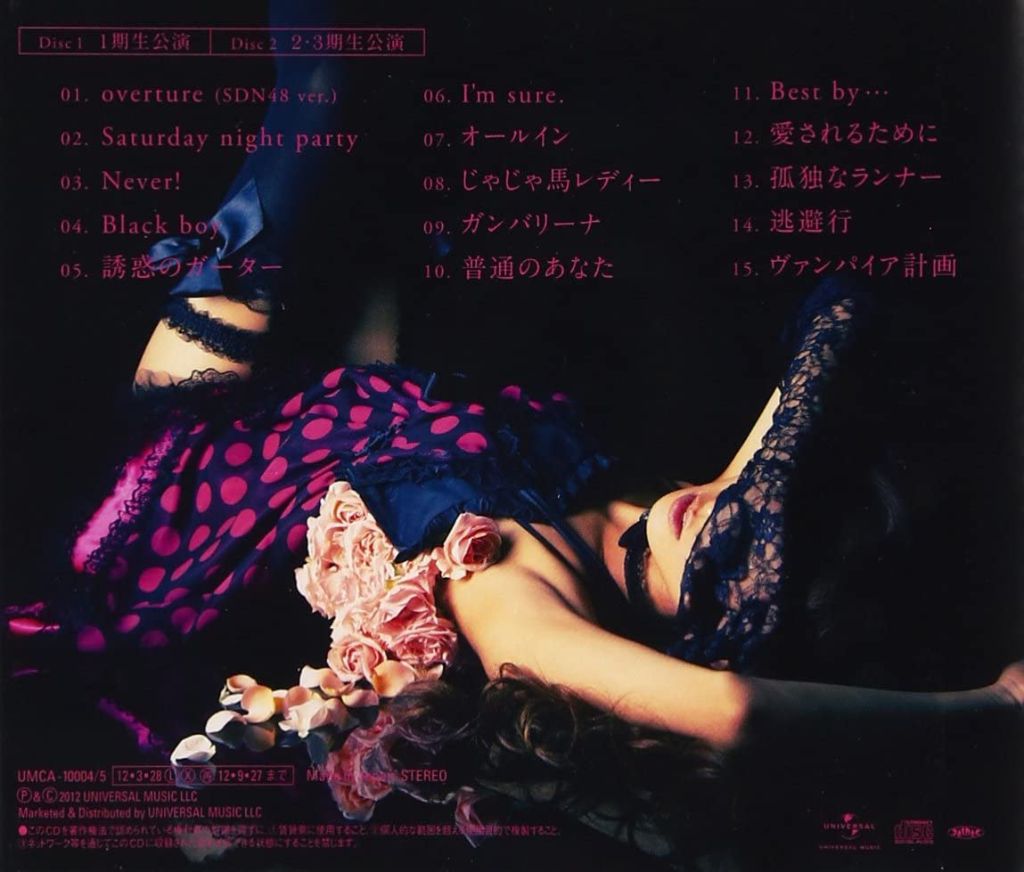 Their first and only original stage, Yuuwaku no Garter, encapsulated in full this “sexy older sister” concept. The group itself was meant to be age restricted to over 20, and the name stood for Saturday Night 48. The structure of the stage is actually quite unusual for most Japan 48 original stage albums with the units going first – a structure only shared with A2, that also starts with two unit songs that then pivot to a group song.

Due to the mature themes and choreography (yes, you read that right) this entire stage was age restricted to 18+. This restriction has been carried over at every performance of this album. Every song seems to be an exploration of having fun (among other ‘mature’ themes) and in fact during the performances the SDN48 members would frequently discuss their boyfriends. Much of the songs highlighted feature a heavy dance beat, living up to the group’s name.

Upon revisiting almost 12 years after this stage was first performed, it is almost fascinating to see how much the idol world has changed.

Back when this was first released, the idea of a “best by” date for idols was extremely common (hence the tongue in cheek song, Best by…), and much younger than it is today. Even now there still exists an age limit for some groups (15 for Sakura Gakuin, 25 (unconfirmed) for Hello! Project, and 30 for 48 Groups, as confirmed by Yuki Kashiwagi). The idea of an idol having a boyfriend and even – gasp! – having sex was extremely controversial, making songs like Futsuu no Anata or I’m Sure extremely edgy for the time.

Perhaps it was going against these pressures that ended up shaping the lyrics for perhaps the most memorable song on this album, Kodoku na Runner.

Overall, this album is something that is fun to listen to, but upon revisiting the MCs and lyrics gives both Crests and I mixed feelings. Yes, it was fun and is absolutely energizing. But at the same time, it is a creature shaped by the forces that idols at that time faced, and it is hard to listen without remembering that fact, whether it be in the racist fetishism of Black Boy, the ageism of Best by…, or just knowing that the MCs were considered too frank for idols of that early 2010s period. Ultimately, it stands the test of time if only to immortalize just what idols had to deal with back then.

The full album can be streamed here.

This review was done in collaboration with friend of the website Crests!